The goal of the Atlas is to explore whether there are wide variations between DHBs in the incidence, treatment and, where possible, outcomes in particular disease areas. The Atlas is designed to prompt debate and raise questions about why differences exist and to stimulate improvement through this debate. This can act as a trigger to spur local action to determine the causes and, if appropriate, local quality improvement activities to improve the quality of care and equity of health care services and outcomes for New Zealanders. Some indicators are presented for bowel cancer overall and some for people with rectal cancer only. Methods used to calculate these indicators are available here. A summary of the cancer pathway and indicators developed at each step is shown in the figure 1.

Figure 1. Bowel cancer treatment pathway and indicators in the bowel cancer domain of the Atlas of Healthcare Variation 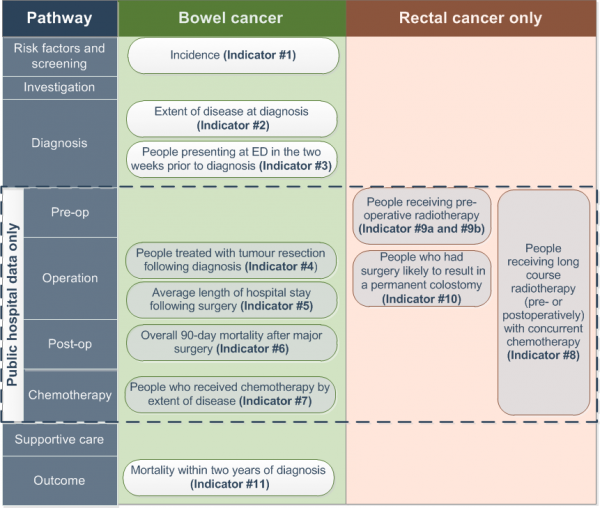 [1]Disease extent is recorded on the Cancer Registry as follows:

The overall unadjusted population rate for people diagnosed with bowel cancer was 65.7 per 100,000 people, with DHB rates ranging from 44.4 to 113.0 per 100,000. In addition, the rates were adjusted to take into account the different age distributions in DHBs. The age adjusted bowel cancer rates show less variation between DHBs.

Disease extent is one of the most important factors in planning how to treat bowel cancer and determining how successful treatment might be.

Patients diagnosed with bowel cancer following ED presentation are managed differently to those referred via other pathways. Variation in this indicator may reflect variations in access to primary and secondary care.

This indicator defines the population for many of the other treatment indicators. Patterns for this indicator will be strongly influenced by the absence of private hospital use data.

Removal of a locally confined cancer by surgery is the most certain method of curing bowel cancer but patient suitability and disease characteristics have a major influence on treatment.

The length of time people with bowel cancer stay in hospital after surgery varies according to their state of health before and after the operation, the extent of their cancer, the type of operation they have, any problems associated with that procedure and the social care they have available at home.

Long stays in hospital after surgery may not only be detrimental to patients (eg, greater risk of exposure to infection) but are also expensive for hospitals.

While surgical removal of a tumour has many benefits, people with bowel cancer may experience serious potential complications including risk to life because of surgery. The risk of dying after surgery can be influenced by the extent of the cancer, the other medical conditions a patient suffers from, and the number of cancers treated by the surgical unit. Improvements in surgical techniques and care of patients are likely, over time, to lead to better survival rates for people with bowel cancer who have surgery.

In localised colon cancer, surgical resection alone is widely accepted as standard treatment, and additional therapy is rarely needed. Most people with adjacent disease who undergo surgery will be cancer-free five years later, without chemotherapy.

The standard treatment for people with regional extent disease is surgery followed by chemotherapy (called adjuvant chemotherapy, meaning it is given after surgery to reduce the risk of a recurrence of the cancer). People who aren’t healthy enough for surgery may still have radiation therapy and/or chemotherapy.

Chemotherapy is typically given to people with distant extent disease before and/or after surgery or instead of surgery. If the metastases (cancer that has spread to distant parts of the body) cannot be removed because they are too large or there are too many of them, chemotherapy may be given before any surgery (neoadjuvant chemotherapy). Then, if the tumours shrink, surgery to remove them may be attempted. Chemotherapy would then be given again after surgery.

Rectal cancer is more prone to local recurrence as it is treated within the confines of the pelvis. The challenge is to achieve a good functional outcome for the patient and reduce the risk of the cancer recurring in the same area.

Long-course radiotherapy (20 or more sessions before or after surgery) provides better local control of rectal cancer if given in conjunction with chemotherapy.

Radiotherapy can reduce the risk of recurrence of some rectal cancers. It is preferable to give radiotherapy before surgery, as it causes fewer side effects compared with radiotherapy after surgery.

There was wide variation across DHBs in the use of short-course radiotherapy in public hospitals, for people with rectal cancer

Pre-operative radiotherapy can be given as short-course radiotherapy (SCRT) or as long-course radiotherapy (LCRT). SCRT has fewer short-term side effects than LCRT, is more convenient for the patient and requires fewer resources. However there are some concerns that SCRT may have more long-term side effects and may be less effective for more advanced tumours. SCRT also requires more coordination, as surgery should occur within a week of completing it. Clinical trials comparing the two approaches are ongoing. However guidance derived from current evidence is available to help clinicians and patients choose between these two treatment options.

Low rectal surgery often results in a permanent colostomy. A colostomy has a significant effect on the patient following surgery and may be associated with higher morbidity and poorer quality of life for patients. Advances in this area and specialist centres mean the outcomes for people with rectal cancer have potential to improve.

Survival for people with bowel cancer

For most people with bowel cancer, survival and cure remain their primary concern after diagnosis.

Variation in two-year mortality rates is likely to reflect, at least in part, differences in the quality of surgery, patient characteristics and whether the patient had access to appropriate chemotherapy and radiotherapy.

What questions do these indicators prompt?

Early diagnosis of symptomatic cancer is likely to lead to improved survival, earlier stage diagnosis and improved quality of life.

Bowel cancer is the most commonly reported cancer in New Zealand, with approximately 3000 cases and 1200 deaths each year.

Faster cancer treatment (FCT) indicators were introduced by the Ministry of Health in July 2012. The indicators require DHBs to collect standardised information on patients who had been referred urgently with a high suspicion of cancer. These FCT indicators focus only on people who are being treated for bowel cancer.

The recently published PIPER study noted that, while national tumour standards provide a focus on better care for patients, a gap exists in the monitoring and reporting of outcomes. The study also noted the need to identify those who are missing out on treatment.

The provisional Standards of Service Provision for Bowel Cancer Patients in New Zealand provided a helpful starting point for consideration of indicators for an Atlas domain.

This project was carried out with the assistance of an Expert Advisory Group that included members of the National Bowel Cancer Working Group and other bowel cancer experts in New Zealand.

The indicators in this Atlas include all people diagnosed with bowel cancer and use data from the New Zealand Cancer Registry, the Pharmaceutical Collection and national admitted patients and outpatient databases. The Cancer Registry includes patients diagnosed with cancer in both public and private hospitals. However treatment data (surgery, radiotherapy and chemotherapy) is available in New Zealand National Collections for very few private hospitals. Previous studies have found that National Collections undercounted receipt of surgery by 13–19 percent, and receipt of chemotherapy or radiotherapy for breast cancer patients by 18 percent and 16 percent respectively.[1]

While the findings in the Atlas may be affected by missing private hospital data the results are generally very similar to those recently reported by the Piper study. The Piper Report was a large study of bowel cancer patients and their treatment, and included data from public and private hospitals in New Zealand.

A note is made in the Atlas commentary where the treatment rates may be underestimated by missing private hospital data.

Further information about health services for people with bowel cancer in New Zealand can be found on the Ministry of Health website: http://www.health.govt.nz/your-health/conditions-and-treatments/diseases-and-illnesses/bowel-cancer.