This Atlas domain presents information on gout by district health board (DHB) including prevalence, prevalence by ethnicity and treatment. It identifies areas of wide variation between different parts of the country and opportunities for quality improvement. 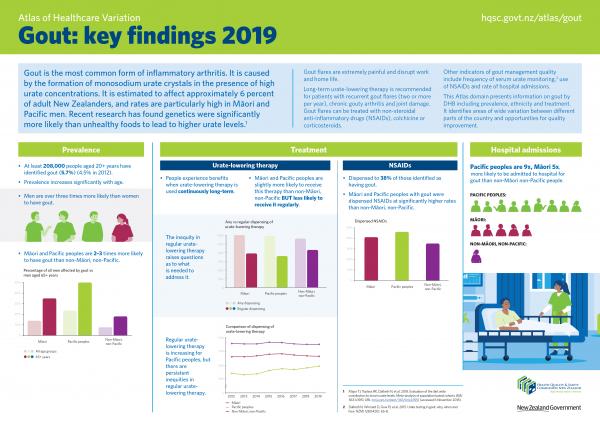 The number and prevalence of people identified as having gout has increased.[1] Men, Māori, Pacific peoples and people aged 65 years and over were most affected.

Table 1: Percentage of population identified as having gout, by age, ethnicity and gender, Aotearoa New Zealand 2019

The difference between any dispensing and regular dispensing of urate-lowering therapy is greater for Māori and Pacific peoples than non-Māori, non-Pacific populations with gout.

Table 2: Percentage of people identified as having gout, who were dispensed a urate-lowering therapy regularly in a year, by age and ethnicity, Aotearoa New Zealand 2019

An NSAID without any urate-lowering therapy was dispensed in 15 percent of people identified as having gout.

Serum urate was tested in the six months following urate-lowering therapy dispensing in 56 percent of people identified as having gout.

Note: The Equity Explorer reports on people with gout whose serum urate was tested in the six months following allopurinol dispensing. The indicator in this Atlas domain is not the same. It does not include point-of-care testing because only laboratory data on testing is available.

Māori and Pacific peoples identified with gout had three times as many hospital admissions for gout.

Gout is the most common form of inflammatory arthritis. It is caused by an inflammatory response to monosodium urate (MSU) crystals, which form in the presence of high urate concentrations. Patients typically present initially with recurrent flares of severe joint inflammation. Over time, in the presence of elevated serum urate concentrations (hyperuricaemia), tophi, chronic arthritis and joint damage can occur.

Gout is estimated to affect approximately 6 percent of adult New Zealanders. Rates of gout are particularly high in Māori and Pacific men, affecting approximately half of Pacific men aged 65 years and over. There is a potential relationship between the method of identifying people with gout and the increasing prevalence. As appropriate dispensing of urate-lowering therapy has increased in line with best practice, and dispensing of urate-lowering therapy is used in the algorithm to identify people with gout, this will contribute to the apparent increase in prevalence, alongside a real increase in prevalence. Gout flares are extremely painful and disrupt work and home life. Tophaceous gout causes bone and joint damage and musculoskeletal disability.[3–5]

Long-term urate-lowering therapy is recommended for patients with recurrent gout flares (two or more per year), chronic gouty arthritis and joint damage. Allopurinol is the first-line urate-lowering therapy drug in Aotearoa New Zealand, but probenecid, benzbromarone and febuxostat are also effective. You need a target serum urate of < 0.36 mmol/L to dissolve MSU crystals, suppress gout flares and for tophi to regress. Gout flares can be treated with NSAIDs, colchicine or corticosteroids.

Other indicators of the quality of gout management include the frequency of serum urate monitoring[6], the use of NSAIDs and the rate of hospital admissions with gout as the primary diagnosis.

For each of the indicators in this Atlas domain, it was not possible to assess whether medicine was clinically indicated, whether the dose was optimal (including the recommended starting and maintenance dose of urate-lowering therapy), whether anti-inflammatory prophylaxis was prescribed at the time of starting urate-lowering therapy, or whether the medicine was taken. Download the methodology (238KB, pdf).

Clinical experience raises questions about the cause for the trends in hospitalisation data – whether at least some of the changes represent differences in the way hospitals are triaging, managing and recording acute severe gout presentations. This is warrants further exploration.

Recent research has found that genetics were significantly more likely than unhealthy foods to lead to higher urate levels.[7]

E-Tangata. The shameful treatment of gout in New Zealand.